More Trails Over Spokane – Coeur d’Alene Metro Area and Beyond

Don’t be mad at us who speak up. Get mad at the people who are doing it and lying to you about it!

I was REALLY unhappy about all the chemtrails I saw streaking the sky yesterday. Originally, it was a beautiful blue sky morning over Lake Coeur d’Alene in north Idaho. I vented my disgust about the trails to a friend. I had told her about them last summer.

She said, “I never noticed them until you pointed them out — yes they are bad today.” 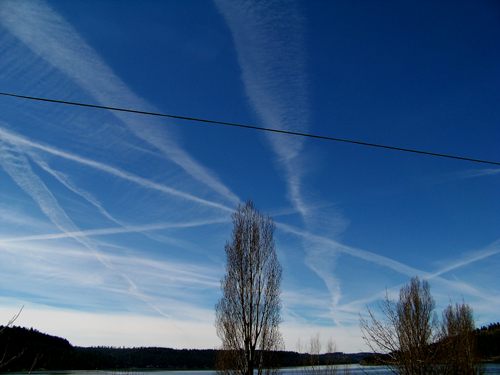 I was so upset, I took some pictures and thought about calling the local airforce base, weather channel, or 911 and telling them to quit lying to us. But I just took pictures and videos instead. I got a shot of some bicyclists on a nice picnic by the lake with chemtrails in the background. Then I went about my business. By the end of the day, the sky was completely shrouded in gray clouds. 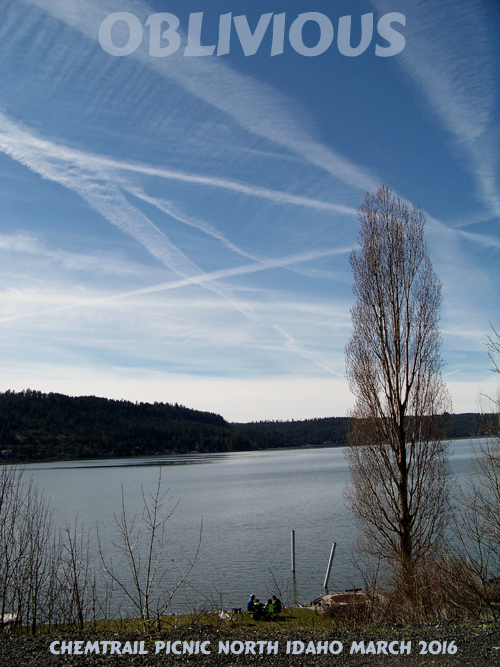 I spoke with my son late in the afternoon, and he mentioned how he was at a bus stop watching the chemtrails going crazy over Spokane, zigzagging everywhere making star shapes; and how they’d been hitting it hard. I am really thankful I have a son who notices such things.

On the bus, he sat next to a woman who was enthusiastically talking about the New World Order and prepping and stuff. The passengers around her told her to shut up and not to ruin their day. She kept talking, and the bus driver actually pulled over, and went back and told her to shut up or get off the bus.

I found it ridiculous when a friend emailed me later in the day and asked if I’d been energized by the beautiful sunny day. Later we went out for a bite to eat and I said I would have been energized, but the chemtrails just made me mad. I asked if he’d seen them and he said no!

He said, if chemtrails were true, you’d think there would be one whisteblower. I said, yes, I know of a whistleblower. Her name is Kristen Meghan. Then he said, “I think there should be more than one whistleblower.” I said, maybe it’s a military program and participants can’t talk about what they are doing.

Later that evening, at his house, I showed him the pictures I had taken. He said the planes in OUR area make those trails because of the atmosphere here — blah blah blah — but east in Montana, and west in Seattle, they don’t happen.

Thank you to citizen activists all over the globe. I am thankful for each and every one of you, because we are the same — we see the same thing when the rest of the people see a normal sky and think we are crazy. And we fight the same fight in trying to get the scales to fall from their eyes — one individual at a time.

Then I happened to see in the feed, there was a video of Kristen Meghan, so I showed him that. I said, look — here is your whistleblower.

I think the next day that chemtrails are blanketing the sky,  he will look out the window and actually SEE them creating a gray sky.

I mentioned the chemtrails to another friend yesterday, and she said, kind of joking — “Just don’t look at them.” She called me today to report that the trails were once again blanketing the sky and blocking the sun.

It’s amazing how the people who are pointing out the trails and the danger to our environment and health  are the ones being vilified. Don’t be  mad at us. Get mad at the people who are doing it and lying to you about it! It’s a case of killing the messenger.

Folks — there are plenty of people with good hearts who don’t want to grasp that this horrible thing is happening. The frog water is nearly at the boiling point.

Every time each of us tells one person we double the awareness. When we tell two people, we triple awareness. Try not to be discouraged. Our numbers are multiplying. I know it is going much slower than we want. Eventually there will be enough people with eyes wide open. We will reach critical mass, and the government will at least admit the spraying program. Of course they will have some really good excuse.

This entry was posted on March 19, 2016 by simpleunhookedliving in Current Events & Signs of the Times and tagged chemtrails, Geoengineering, north Idaho, weather warfare.

What Are You Looking For?

All things TRUTH all things REYMEGA

Breaking Out of the Box

My own personal art therapy journal

An innovative approach to Science, Philosophy, Politics and Economics

Where everyday is the start of a new adventure

Back to basics living for a new century

Where Are We Going?

Thoughts on the Future of Human Life

Growing the nation's food, one city at a time

Education and Design for a Sustainable World

Self sufficency, dignity and security.

Dedicated to freedom in our lifetimes

The Interior of Leaves

A Garden In the Making

My Search For The Simple Life